Relationships can be the epitome of complicated. Keep in mind though, they can also be easy. You have to basically let go. Freedom and trust are pivotal. The person you are in a relationship is not under your control, they should respect you enough to know what to do and what not to do. Loyalty is really a big thing. People really have an issue with being loyal and the idea of being one just one person bothers (scares) some people. I don’t necessarily think this is an issue, as long as everyone in the relationship knows what is going on. For a long time, I feel like I was not aware of what was really going on around me. Afterwards, I had this desire to really just know what is going on, but I realized that I need to really just worry about myself. You need to find happiness, love, appreciation and respect within yourself, so that all relationships can be successful. Also just communicate. I keep saying that hoping that someone somewhere is going to read what I’m saying and it click for them. You have to communicate. The only other option is just being alone. Things will get better, as you get stronger. Let your pride go. Pride ruins everything, along with ego. Remaining humble is important, it’s a value that many people have regarded as unimportant, but it fact it allows for better relationships. Watch the way you act towards yourself and others. The golden rule is treat others the way you want to be treated (I could speak on honesty is the best policy but that’s a topic for another day). Okay back to my advice on relationships. I think that anything can be easy, if you are willing to work on it. It can’t just be you though, the other person has to be just as willing. You can’t make a relationship by yourself, trust me I’ve tried it’s unsuccessful. Just give everyone the chance you’d like to have. Everyone has boundaries, so keep that in mind. Communication, along with love, patience and trust (most important happiness) make successful relationships. If it’s meant to be you won’t have to force it, just let it flow. Go with the flow. 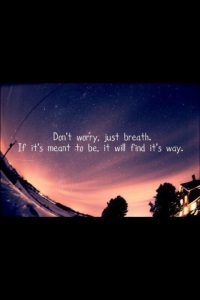 i'm just a blogger who's on a never ending journey learning all i can about myself. View more posts